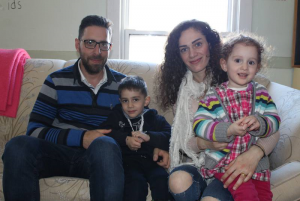 The Nakhleh family of Syrian refugees are finally safely settled into their new home in Charlottetown, PE. They arrived after a two day journey from Beirut, Lebanon, landing in the wee hours of Friday morning, March 1, 2019.

The family has been sponsored by The Brother’s Keeper Refugee Sponsorship Team, which includes the Kirk of St. James and a number of other local churches, led by Central Christian Church. This is the second family that the Kirk has helped to settle recently. We supported the resettlement of the Toma family from Iraq a year ago.

Both George and Daisy Nakhleh were pharmacists in Damascus, Syria when the civil war there broke out. Their pharmacy and home were ransacked by ISIS fighters, forcing the family to split up – George escaping conscription into Lebanon and Daisy and the children, Mark and Lulu, staying for a time in Syria. They are relieved to be together again and in a safe place.

The couple’s cousin Bassel, a Charlottetown resident, advocated that they move here. “We wanted to be safe together,” said George. “They advised us to come to Canada. (It’s) a better future for our children.”

While in Lebanon the family shared small rooms, and had only one bedroom. So one of the immediate big changes for the family was having a two bedroom apartment. Mark woke up just hours after going to bed in his new bunk bed, provided by the Kirk, and started to explore his new room, decorated with African animals, and full of toys and colouring books. He immediately woke up his little sister, Lulu to share the excitement, and they woke their weary parents to exclaim over their good fortune. It was just like Christmas, with the children excited over their specially decorated room, and Daisy overwhelmed by the fully outfitted bathroom and kitchen, both furnished in good measure by the Kirk.

The Kirk held a toonie drive to purchase new car seats for the children as well. These have proven to be just the right size and are very easy to install in vehicles.

George speaks a good bit of English, whereas Daisy is more comfortable in Canada’s second language, French. The Kirk will be providing the family with an Arabic-English pictorial dictionary and the children with an English pictorial dictionary for kids, so that they can work on their English skills. George and Daisy both hope to become fluent quickly, and finish educational upgrading, so that they can find employment in their former pharmacy field.

“They are a lovely young family,” said David Robinson, Action Clerk of Session, after meeting the family during a welcoming dinner at Cedars Restaurant. “They have been so grateful for all of the assistance that The Brother’s Keeper has provided. It warms one’s heart to see the family so happily embarking on this new phase of their lives.”

Photo and Nakhleh quotation courtesy of the Guardian.